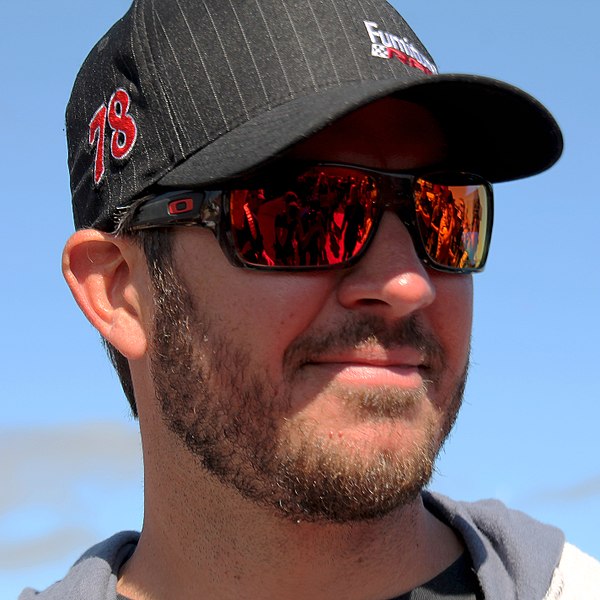 It’s not often the move of the race involves a fake-out over the radio. But that’s exactly what went down Sunday at Sonoma.

Kevin Harvick and Martin Truex Jr. were the class of the field. Barring the unexpected, one of those two were going to win. With Harvick leading in the final stage and the pit window open, crew chief Cole Pearn called Truex to pit road. Harvick’s crew chief Rodney Childers was listening and instructed Harvick to pit as well. When Harvick did pit, Pearn told Truex to stay out and run a few more laps.

And that was that.

Pearn duped Childers into pitting Harvick earlier than he wanted to, which ultimately decided the race. Once Truex did pit, he had about eight laps fresher tires. Truex ran Harvick down easily and cruised to a ten-second victory.

Pearn’s strategy depended on the final stage going caution free and he called it right. It is the second year in a row the final stage at Sonoma was completed without a caution.

2. The End of the Road Course Specialist

Road course ringers have been irrelevant in the Cup Series for several years now. But Sunday’s race felt different. Once A.J. Allmendinger bowed out with a blown engine, the wild card factor was gone. And even if Allmendinger hadn’t blown up, it was clear early on he had nothing for the top two.

At one point during the race I looked at the top ten and the running order resembled what we normally see at a mile and a half track. Take another look at the top five:

If I didn’t know better, I’d think that was the top five for Chicagoland next week. When did Chase Elliott become a road course expert? How about Eric Jones, Aric Almirola, or Alex Bowman? All of them finished in the top ten yet none are known for their road racing prowess.

And that’s my point. You no longer have to be a great road racer to run well at a road course. For years, if your name wasn’t Gordon, Stewart, Ambrose, Wallace, or Rudd, your goal was to just keep all four wheels on the track. For as good Dale Earnhardt was, he only won one road course race. Today’s drivers are so much more comfortable and prepared when it comes to road racing. And the race teams have done an incredible job of ensuring their drivers don’t have to be a ‘ringer’ to post a respectable finish.

However, there is a downside to this. It is now even harder for a guy like Allmendinger, who drives for a middle of the pack team, to break through and win. Allmendinger knows the two road courses are his best chances to win and steal a playoff spot. It wasn’t long ago his road racing abilities gave him a distinct edge over most of his peers. In today’s NASCAR, it still helps but the gap has closed considerably.

I am very much looking forward to NBC taking over NASCAR telecasts for the remainder of the season. I find that their coverage caters more to the diehard fan while FOX targets the casual fan. Neither is right or wrong, but as a NASCAR fan for more than 30 years, I gravitate toward NBC. I am also looking forward to Dale Earnhardt Jr. in the booth. Isn’t everybody?

Additionally, I am anxious to see what innovations NBC has in store. They were the ones who introduced the visor cam and the post-race winner’s interview prior to victory lane. Then FOX came in this year and ripped off NBC’s idea. I don’t blame FOX. After all, imitation is the sincerest form of flattery.

I’m not trying to pick on FOX. There are plenty of people who do that already. That being said, there have been some brutal, cringe-worthy moments this season during their telecasts. The constant barrage of commercials during the Daytona 500, their ambiguity when the weather is involved, and anything featuring Michael Waltrip. That’s not to say FOX does a poor job because there are some brilliant minds on that team. I just think NBC produces a much cleaner, professional and intelligent presentation.

But seriously FOX, the endless commercials are the worst.