Truex then moved up to the Xfinity Series, landing part-time rides with Michael Waltrip Racing and Joe Gibbs Racing. In 28 races over a two-year span, Truex scored two top-five finishes, nine top-ten finishes, and one pole. The highlight was a second-place at Dover in 2012, a race he led with six laps to go.

Unable to find a full-time ride, Truex started only four races across the three premier NASCAR series in 2013. The following season, he joined the underfunded BK Racing team. He finished inside the top 30 once in 23 races and had eight DNFs.

He left BK Racing following the 2014 season and raced part-time in the Xfinity and Camping World Truck Series for two years.

Truex secured his first full-time ride in 2017, driving for Shigeaki Hattori in the Truck Series. He won two poles and recorded eight top-5s, 13 top-10s, and missed the playoffs on a tiebreaker. Then in the offseason, Truex joined Kaulig Racing for 2018, a team that made the Xfinity Series playoffs in each of the last two seasons but is still searching for its first win. Truex is currently eighth in points and a near lock to make the playoffs.

I recently had the chance to chat with Truex about a variety of topics. My biggest takeaway is that for the first time in his career, Truex feels a sense of stability. At one time, he thought his racing days were done. Instead, Truex has new life. And at 26, he still has plenty left in the tank.

Q: At the start of the season, you said this was your second chance. With that in mind, how much are you enjoying this season?

Ryan: It’s been awesome. I’ve been floating around for a while with a lot of different teams. This is my first full Xfinity season. It feels good to know when I walk into the garage every week my name is on the car and my seat is in it and I don’t have to worry about what I’m going to do next week, who I’m going to drive for, if I’m going to race, or any of that. It’s nice to have that weight lifted off my shoulders. Obviously, there is still pressure to perform, but knowing the consistency is there is very nice.

Q: How would you assess the season so far?

Ryan: It’s been good. We’ve made a lot of progress since Daytona and we’ve been very consistent, which is why we’re eighth in points right now. At this point in the year, we’re just focused on finding more speed to get ready for the playoffs. Once they start, we know we can give them a shot and try to get to Homestead.

Q: How close are you to getting to victory lane?

Ryan: It depends on the track. You never know how these races are going to play out. There are a lot of unknowns and a lot of places where I feel we can be strong. I don’t think there’s one place circled that I think we can go dominate, but there are definitely places where we can be strong and if luck happens to fall our way we can get ourselves a win.

Q: Do you feel your time at BK Racing helped or hurt how you were viewed as a driver?

Ryan: There is the good side and the bad side. The good side is I got a lot of experience in Cup cars against Cup drivers. Obviously, it wasn’t the best situation and obviously, it didn’t end well. But it’s hard to just sit on the couch when you know there is a Cup opportunity out there. At that point, I didn’t have anything else going on other than the truck race I ran at Daytona. I wasn’t willing to wait on the sidelines. Not very often does that work, being stubborn and sitting and waiting for someone to come to you and say ‘come drive this car’. It was the best opportunity for me at the time. Did it hurt me in some people’s eyes? Probably. I got a lot of bad reviews as a driver that year, put in bad situations and it’s hard to impress people, especially as a rookie and then to have the weight of a team that is a backmarker team on top of that. It’s easy to get yourself in bad situations. On that side of things, it hurt.

Personally, getting the experience and just dealing with the week to week of fighting and clawing just to run 30th, I think, made me a better driver. Looking back, it’s hard to know either way. If I didn’t do that, I might not be here now. I could’ve sat on the couch that whole year, not gotten anything and been done racing. It’s hard to balance that. The way the sport was and still is, you have to take every opportunity you get.

Q: You mentioned the criticism you received. Did you think you had to rehabilitate your image as a driver?

Ryan: Not so much in the garage as much as maybe the fans and the people outside looking in. People that don’t know the inner workings of the sport and what you’re dealing with. People in the sport that are here every weekend, they get it. They know what you’re dealing with and what you’re going through. And there are times you can make them mad and they going to say you’re an idiot and then there are times they are going to say you did the right thing.

I think personally, I had to convince myself again that I was good enough to win races and be good in competitive equipment. Even after that in 2015, I only ran five races all year in anything. I had some strong runs and it seemed like every time we had a strong run something would happen, whether it was a tire cut down or getting caught up in a wreck. Going into 2016 with Hattori in a part-time deal and went to Daytona and finished second by half a truck-length, that was nice just to give me a shot in the arm. Going into last year, to be able to run full-time for the first time and be competitive with a small team like that, go out and race Christopher Bell, Matt Crafton and all those guys in our first full year was really cool. I think that really kind of put me back on the map and showed people that if you give me equipment that’s capable of even competing near the front I’m going to find a way to get up there.

Q: Growing up, what was your relationship like with your brother Martin from a competitive standpoint?

Ryan: I was so much younger that it wasn’t really competitive. I was more of the annoying little brother that tried to tag along to everything. I was always at the races in the stands watching. Whenever I could go to the shop and bother everybody I would. He moved out when I was 12 so from about 12 to 17 I didn’t see him much at all. I didn’t go to many races because of school and everything until I started racing when I was 15. When I moved to Charlotte when I was 17, that’s when started getting close again and once I got older we connected more. We’re a lot closer now than we were back then because he was always gone either on the road or out on the clam boats fishing. I definitely see a lot more of him now than I did back then.

Q: Martin was a racer. So was your father. What led you to join the family business?

Ryan: I was always around it, but I was never really interested in driving. It was when Martin got into the Busch Series with Dale (Earnhardt) Jr. that I started to get into it at a more microscopic level. I was like ‘You know what? I want to try this’. The first thing I ever drove I was probably 13 or 14. I went with his motorhome driver at the time to some go-kart track in Indianapolis. We were going there from somewhere. I rode in the motorhome from one track to another. I ran a go-kart and right away my lap times were on par with the guys that race there. I just had a knack for it right away. It took about two years of begging my dad before he would let me even try to race anything. They had one kid racing, they didn’t want another one. So it took a lot of begging to get that chance, but once I did it, I took off.

Q: How much does Martin’s recent success motivate you to try and achieve the same?

Ryan: The biggest thing for me is looking at how long it took him to get the right combo. The right crew chief, manufacturer, team, sponsors…all of that stuff matters. He’s had good groups around him in the past, but nothing that’s been as good as this.

It took him 9-10 years in the Cup Series just to find that stability and all of that stuff. For me, being in the Xfinity Series part-time for as long as I have, looking at that – I’m always feeling like this is my shot and I have to prove myself now. But as long as you can keep yourself in the fight and keep working hard you can get to the top level like that.

Q: Where did you come up with the idea of your T-shirts? 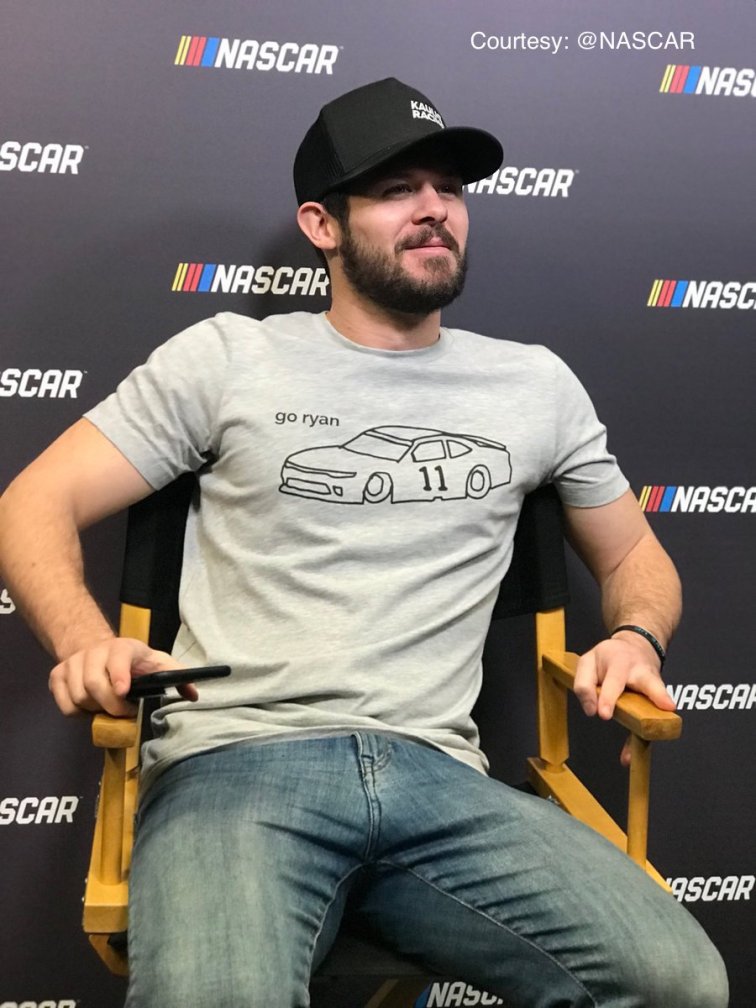 Ryan: I just thought of it. I did it as a joke back when I was driving the 81 truck. I showed it to my friends and they all thought it was funny and cool. I never did anything with it. When I drove the 16 I was like ‘I’ve never had a shirt or any merchandise. I’m just going to do it.’ I did it and it took off. Dale Jr. loved it, retweeted it, and then everybody loved it. And it’s just taken off from there.

How are they selling?

Do you have any other shirts?

Ryan: I got a few. That’s the only one that’s silly.

Is that one the most popular?

Q: If you could only race at one track for the rest of your career, where would it be?

Ryan: I have no idea. That’s a great question. (pause) Probably Dover.

Ryan: I love Dover. I’ve always liked it. I’ve always been fast there. It’s a home track, a lot of good memories.